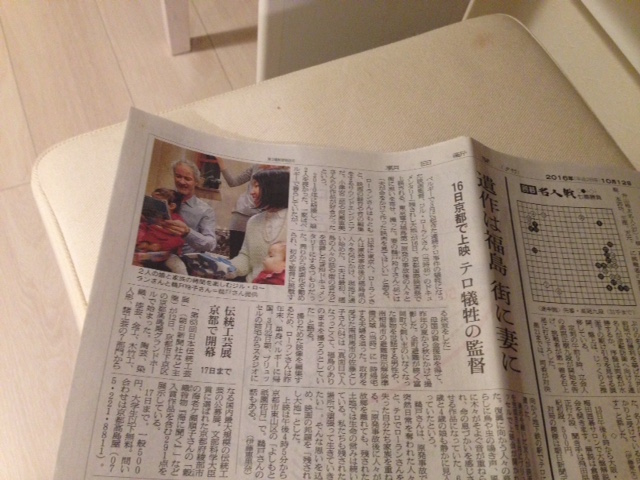 “Fukushima” is the posthumous work.

Toward the towns and his wife.

On the 16th, in Kyoto, the work will be put on the screen.

The director is a victim of terrorism.

“Nokosareshi Daichi” (“Abandoned Land”), a documentary, which the late Mr. Gilles Laurent (46 at that time), a film director, who fell a victim caused by the continuous acts of terrorism that occurred in March in Belgium, directed, is to be screened on 16th this month at the Kyoto International Film Festival. He meditated about and cinematized the people and their towns after the disaster of No. 1 Fukushima Nuclear Power Plant, the Tokyo Power Company. His wife, Reiko Udo-san (46) tells us “I desire many people will appreciate the film my husband produced with desperate efforts.”

Laurent-san was originally a sound engineer who recorded and edited the sounds of films. They say he loved the works of Yasujiro Ozu and Naomi Kawase so much.

He married in 2010 and was blessed with two daughters. The family was living in Belgium, and came to Tokyo in 2013. Laurent-san worried about the people living in Fukushima prefecture after the disaster of nuclear power plant, and began to go to and from the actual places. “My husband, at first, was going to finish up a sound documentary which included recording just talks of the people and sounds of the towns in Fukushima. But then, he was recommended to take a motion picture by his friends and acquaintances, and so he decided to try to be a director for the first time.”

He continued to shoot scenes from summer to autumn last year getting the mother country’s support of funds. He chased a man taking care of animals which had lost their owners in Tomioka-machi where the whole town were compelled to continue to take shelter, and also followed husband and wife who got temporarily back to Minamisoma City, that was the area of preparation for the termination of evacuation directions.

Toshiko Sato-san (64) living in Minamisoma City, who agreed to be interviewed, told us “He was serious, friendly, and making every effort to shoot what Fukushima really was.”

Laurent-san came back to Belgium all alone at the end of last year in order to edit the gathered images he filmed. And in the morning on the 22nd in March, he met with the act of terrorism at the subway station on his way to his studio from his elder sister’s home in Brussels.

His associates who succeeded to the wishes completed the film, and in June it was opened to the public at the screening society in Brussels. The work was quite full of, and piled up with the people’s lives toward revivals, the songs of birds and insects, and the sounds of trees which rustled by the wind. So we can feel the breathing of all lives through the film. I was told that his two daughters (elder daughter 6, younger daughter 4) were gazing intently at the film’s scenes silently.

Udo-san laid the people who were robbed of daily routines suddenly because of the nuclear power plant’s disaster on top of her family members that lost Laurent-san as a result of terrorist incident. “Even though people are separated from their home towns after the nuclear power plant’s disaster, in the abandoned land, the activity of life is going on. We also want to continue to live keeping going to the end in the place that is left.” She decided the Japanese title of the film to be “Nokosareshi Daichi” (“Abandoned Land”) with such all her heart as fervent hope.

The film’s showing on a screen is to be carried out from 4:05 p.m. at “Yoshimoto Gion Kagetsu” in Higashiyama-Ward, Kyoto City. Udo-san’s talk is also prepared on the stage.

・The upper side photo: Gilles Laurent-san & Reiko Udo-san enjoying themselves by having a good time of the family together with their two daughters. (Offered by Udo-san)