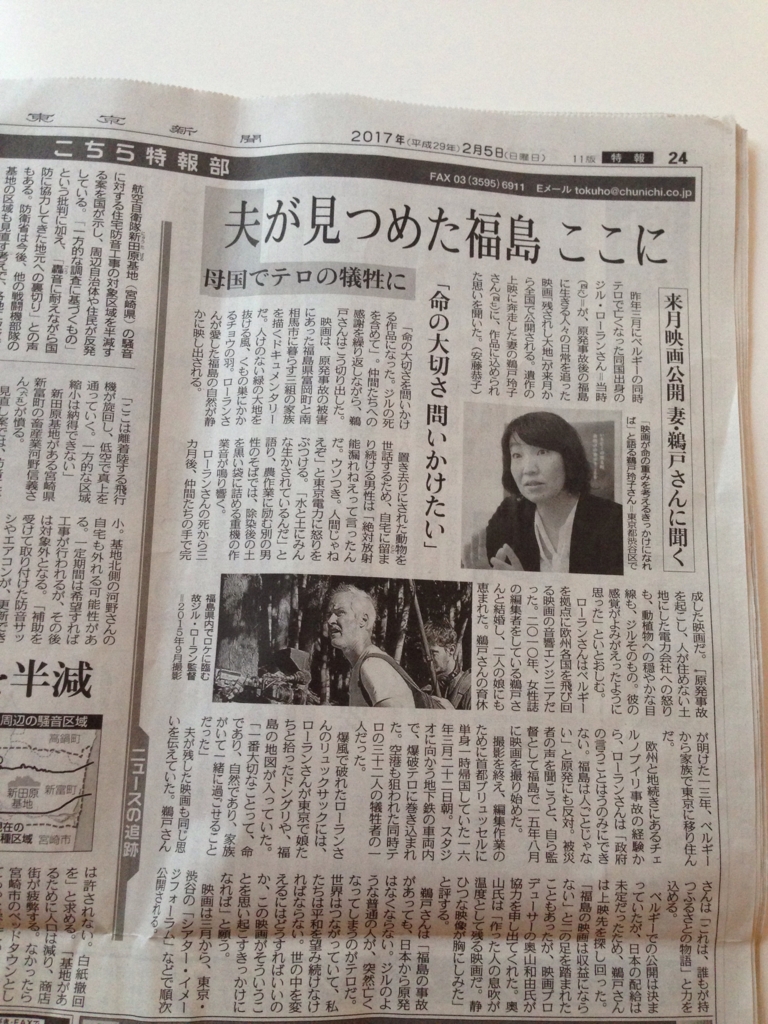 Here is Fukushima the Husband gazed at.

The Victim of terrorism in his mother country.

The film is to be opened to the public next month. We hung on his wife Udo-san’s every word.

The film “La Terre Abandonnée” in which the late Gilles Laurent had pursued the daily routines of the people who lived in Fukushima after the nuclear power plant’s accident. He was from Belgium, and died because of the concurrent terrorism in Belgium in March last year, (46 years old at that time). We listened to the late Gilles Laurent’s wife Reiko Udo-san, who exerted herself for the posthumous work’s showing on a screen, looking for everything she felt in the film. ; (Kyoko Ando)

★The photo: “I hope this film would give us an opportunity to deliberate on the weight of life.” says Reiko Udo-san. The film will be released all over Japan from next month. (At Shibuya in Tokyo Metropolis)

“I’d like to put a question to people about ‘the preciousness of life’.”

“The film has become a work which has shot a question to people about the precious ness of life, including Gilles’ death.” Udo-san began to talk like this, repeating her appreciation of the fellow workers.

This film is a documentary which depicts three families living in Tomioka town and Minamisoma town in Fukushima Prefecture which have been damaged by the nuclear power plant accident. The wind that blows through the deserted green land, and the feather of a butterfly that was caught in a spider’s web….These natural scenes in Fukushima were loved by Mr. Laurent, and he showed them silently in the film.

The man who continues to stay at his own home in order to take care of the animals left behind, vents his anger on Tokyo Power Plant Company, by saying “They said they never let leak radioactivity absolutely. They are liars! They aren’t human beings!”….

“All living things on our globe depend on one another for survival thanks to water and earth.” And by the side of another man working in the field, the sound of a heavy machine with which injects the decontaminated earth into the black sacks buzzes.

The film was completed by the late Laurent’s colleagues after three months of his death. Reiko-san “cherishes the late Gilles Laurent’s anger toward the power plant company which has made the land where human beings cannot live, and also his line of calm sight toward the animals and plants.” “These are in fact Gilles himself.” “It seems to me that his own feeling was brought back to life.”

Mr. Laurent had been a sound engineer in the field of films who had hustled about all over the European countries based in Belgium. He married Udo-san in 2010, who is an editor of a woman’s magazine, and was blessed with two daughters. In 2013, when Udo-san’s childcare leave was over, he emigrated from Belgium to Tokyo together with all his family.

Mr. Laurent had been also against the nuclear power generation, judging from the past experience, that is, the disaster of Chernobyl which is adjacent to Europe. Because “what the government says is not accepted without question, and Fukushima is not the sort of incident you can just ignore.” Therefore, he began to film a movie in August, 2015, at Fukushima as the director by himself in order to hear from the sufferers.

In the morning of March 22, 2016 when Gilles-san had returned to his country, Brussels metropolis all alone temporally, in order to edit the film after finishing shooting the scenes…. He had been drawn into direct involvement in an explosion terrorism inside a car of the subway bound for his studio…. He was one of the 32 victims because of the simultaneous terrorism attack including that at airport, too.

There were a map of Fukushima and acorns Mr. Laurent had picked up together with his daughters in Tokyo, in his rucksack broken by the force of the explosion. Reiko-san says “What was the most significant were life, nature, and to have a family and be able to live together.”

The film her husband left also told the same thought. Udo-san tells us with all her strength that “this is a story of everyone’s spiritual home.”

The exhibition of this film in Belgium had been fixed. But here in japan, its distribution remained undecided. Therefore, Udo-san searched high and low for the places of showing on a screen. “The movie concerning Fukushima is not profitable.” hesitated anyone. However, Mr. Kazuyoshi Okuyama, a film producer, offered his cooperation.

Mr. Okuyama places a high value on the film. “This film leaves a sense of its creator as a temperature. The tranquil images sank deeply into our mind.”

Udo-san hopes “In spite of the disaster of Fukushima, nuclear power generation never be gone from Japan. What we call terrorism is, as it were, a sudden death of an ordinary human being like Gilles. The world is linked. So we have to continue to desire peace. I’d like this film to be a start for remembering how to do in order to change the world.

The film is to be opened to the public successively from March at “the Theater Imageforum” in Shibuya, Tokyo, and in some other cities.

(Translation by my father, Yasutaka Udo)

Information of the theater in Tokyowww.imageforum.co.jp

« 感想コラージュ。Feedback from early aud… よみがえりの魔法 I wished the existenc… »
プロフィール