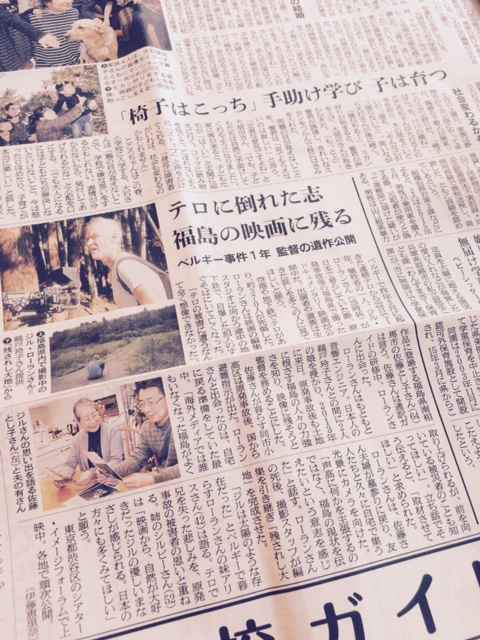 Here is an article from Asahi Newspaper Company, evening edition of 22nd of March, which is Gilles’ death anniversary. The journalist is Mrs. Erina Ito, who wrote a column called ‘A person’ about me the other day.

南相馬市在住の佐藤さん夫婦まで直接往復してくださったり、ベルギーにいる義姉妹、アリスやシルヴィーにもわざわざスカイプをして取材してくれました。
She went to Mr. and Mrs. Sato’s place in Minamisoma city and she called my sisters-in-law, Sylvie and Alice on skype.
普段のブログの英語訳は自分で適当にやっている私ですが、新聞記事に限っては、父に頼むことにしています。今回も父が翻訳してくれたのでここに掲載させていただきます。
Normally I translte my blog by myself, but just as for newspaper articles, I depend on my father. Then here is another piece of his work.

The aspiration that fell down by terrorism

Still exists in the film “Fukushima”

Just one year after the Belgian Accident, the Director’s posthumous work is now being released

One year passed since March 22 from the double terrorism attacks that happened last year in Belgium. The documentary film which the late Mr. Gilles Laurent (46 at that time), one of the victims, shot in Fukushima Prefecture after the nuclear power plant accident, when he was living in Japan, is now being opened to the public. The performers and the families of the deceased desire that many people would look sincerly at their proof of lives.

About 370 people were killed or wounded due to the acts of terrorism at the airport and in the subway. The late Mr. Laurent who was nearby the criminal who blew himself up passed away in the subway on his way to the studio in order to edit his film.

“I couldn’t imagine Mr. Laurent to be attacked by terrorism.” says Mrs. Toshiko Sato who lives and appears on the scene, in Minamisoma City, Fukushima Prefecture. She met him while she happened to be there as an interpretation guide.

Mr. Laurent was originally a sound engineer. He was blessed with two daughters whose mother is a Japanese, Mrs. Reiko Udo, and came to Japan in 2013. He became to know the strength of the people in Fukushima who are rooted deeply in their land, even after the nuclear power plant disaster, and made up his mind to film the scenes as a director.

Toward Kodaka-Ward of the above City where Mrs. Satoh lives, after the nuclear power plant accident, the Japanese government issued the instructions to evacuate. It was at the very time when she was preparing to come back to her own house that she met Mr. Laurent. “Oversea media often take up the situation about Fukushima where nobody is there. But I think they have to know that there are also people who are looking straight forward.” She conveyed her thought like this to Mr. Laurent, just standing “chatting together”. Then she was asked of, “Please let me collect the data.” by him.

Mr. Laurent aimed the camera at the scene of Mr. and Mrs. Sato, who came back to visit their grave and later they gathered together with their friends first time in a long while. Mrs. Sato says looking back at the time. “He never insisted on anything loudly, but he surely wanted to convey the Fukushima’s present state with his strong will.” After Mr. Laurent’s death, his filming staff took over the editing and completed the film “LA TERRE ABANDONNÉE”.

“Gilles was an existence like the sun.” says Alice (42) who is a younger sister of Mr. Laurent living in Belgium. And she feels that her sadness over her brother’s death will be similar to sorrow of the victims of nuclear power plant accident. Mr. Laurent’s elder sister, Sylvie (52) desires from her heart, “I can feel Gilles’ gentle gaze from the film’s scenes. He loved Nature so much. I hope that lots of Japanese people would also watch the film.”

The film is now being screened at the Theater Image Forum located in Shibuya-Ward, Tokyo Metropolis. And it’s to be continuously opened nationwide one after another.

・The lower-side photo: One scene in the film.