I had lots of feedback about the column 'A Person' in Asahi Newspaper. It is the newspaper which used to be delivered to home every morning in my childhood. And...it is one of the widely-known columns.

However I myself did not do anything actually. I did not direct the film. I just kept holding it tightly in my hands, had supports from people, and then reached at this stage and they wanted to describe me as 'A Person' of that day in Japan.  But to be honest,of course I felt happy.

I just realised that Gilles had put a small microphone on me when he passed away. Normally it is sound engineer's work to put it inside the clothes of actors. Then the voice can be recorded and reaches to public. Literally these days, I sometimes get this kind of microphone on me when TV crew comes.

His device of work, a microphone. Now it is on my throat. Ok, I will keep speaking as if I am always with you, I say to him in my heart.

Here is an English translation for the artcile (helped by my father as a translator). 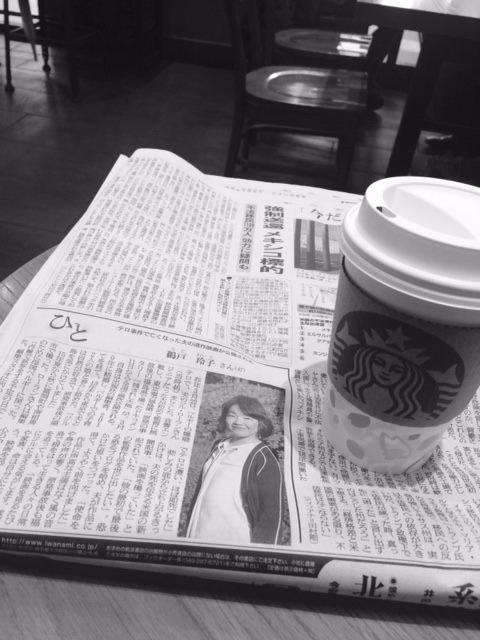 The posthumous film made by her husband who passed away in the terrorism attack is to be screened soon.

She lost her husband, Gilles Laurent (46, at that time) on March 22, last year because of the terrorism attack in Belgium. The documentary film “LA TERRE ABANDONNÉE (the Abandoned Land)” which her husband, an ex-sound engineer directed for the first time depicts Fukushima after the accident of Tokyo Elcetric Power Company’s Fukushima No.1 Plant. It is now to be released from March 11 all over Japan successively.

She herself is an editor of a publishing company. She married him in 2010 and after her childcare in Belgium, they began to live in Tokyo together with two daughters from the end of 2013. She says, “Gilles loved Nature, and was very concerned about Fukushima after the accident.”

Mr. Gilles Laurent filmed the scenes in Tomioka town and Minamisoma City from summer to autumn in 2015. He came back to his mother country Belgium to edit the film. Mrs. Reiko Udo looks back at the time and says “It was the day when he was going to give a preview of the film to his colleagues. He encountered the terrorism attack in the subway on his way to the editing studio. It was almost an instantaneous death.”

Her opportunity of getting to her feet from the bottom of lamentation, was an American newspaper article that reported her husband’s death. It said,“He had filmed Fukushima.” Then she thought “I want people to know his first and last work.” Then she began to start  the blog with some hesitation first, and kept writing her feelings about his idea and passion toward his own work. “I could get the mission and become positive at last.”

We do not find any loud insistence in the film. Instead, the sound of wind and the twittering of birds are heard somewhere in far away. The film depicts the daily routines of the people living with their firm roots in Fukushima even after the nuclear power plant’s disaster. Mrs. Reiko Udo says, “I feel myself I can meet Gilles each time when I watch the film. What does our hometown mean to us? What does our family mean? What is ‘life’ for us first of all? …I wish all the people who view this film would find their own answers through it.”

The text and photo: Erina Itoh